Entry 2 to the MKLR Hall of Fame is Mark Atkinson.

Now we have to clarify which one at this point as we have 2 in the club. Mark is normally referred to as “Late Group Mark” or just late Mark as he’s very nearly always late for races and makes few appearances in club photos. Mostly this is due to a last minute trip to McDonald’s for an Egg McMuffin (elite athlete breakfast). 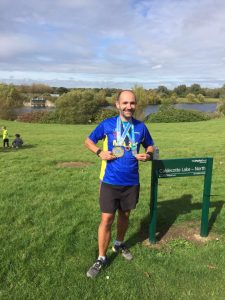 In September this year Mark ran (and won) his 100th marathon, and becomes only the second club member to attain membership to the 100 Marathon Club.

In his own words;

“First marathon was the ‘prestigious’ Luton in November 2011 where I fell apart, hadn’t really trained as it was ‘only’ twice the distance of a half, and barely beat the course cut off.

100th marathon was the Enigma Automobiles event on 23rd September 2017.

Still don’t know why really. Other than some short lived spells of gym membership I’m inherently a lazy sloth and athletic ability was limited to being able to eat an XL stuffed crust pizza in one sitting. In my early 30s I realised with two small kids running around I needed to get fit or at least lose enough weight to see my feet. Now after 100+ marathons I have feet I’d rather not see.

Having been passed on my first marathon by someone twice my age wearing a 100 Marathon Club top a little seed was sown and I began the journey to get one for myself. Decided I should probably train and chanced upon MKLR. Was doubtful of attending as I thought running clubs were for ‘proper hardcore runners’ but was warmly welcomed and I realised how much easier marathons can be if you actually train for them, and how the training is better if you know there’s a group of other runners waiting to run up a wet hill in the cold dark winter night with you.

Somewhere along the way I grew to love running in all forms, from competitive lung-aching bursts at 5 and 10k races, to sociable chatty training runs through the woods with club mates or accompanied by four legged friends.”

That doesn’t quite cover the full extent of his achievement though. Along the way he’s brought his marathon PB down to 3:15 ish, and in 2017 has completed two Centurion 100 mile races (South Downs Way and Autumn 100). He’s an ever present at the MK Marathon, and since his first marathon in November 2011 (Luton) he’s taken 1hr 42mins off his PB. 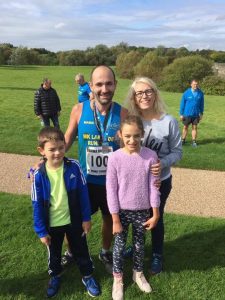 For a full write up of the 100 marathon day day; Click Here

and Mark’s blog for all things running; Click Here